I put out this picture on LinkedIn and Instagram yesterday with the following caption: 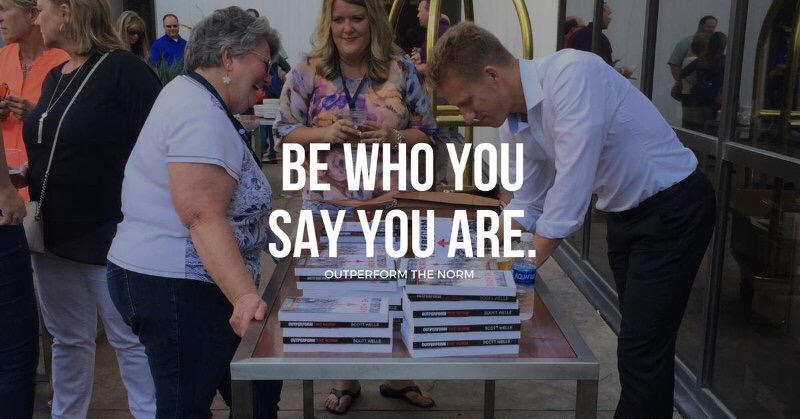 I remember attending a large business breakfast a while back where the speaker talked about leadership. His message was good. Afterwards, I walked up to him to compliment him on his performance, but to my surprise, he couldn’t have been more disinterested, dismissive and overall “too cool for school.” I swore on that day that I would never be a different person on stage that I was off stage. Wherever you are, whatever you’re doing, who you are with anyone is who you are with everyone. How you do anything is how you do everything. Be who you say you are!

I was early on in my speaking career when the above incident happened and I'll never reveal the speaker's name, but it had a profound impact on me. It has shaped the way I interact with others ever since.

In April, I spoke for a large group of project managers in Denver, CO. I remember three separate things happening that day:

First, I walked into a Starbucks across the street from the Denver Convention Center at 7:30am. As you can guess, it was crazy busy. There were two separate lines for two separate cashiers. Like a grocery store, I thought I would pick a line and hope it was the fastest.

I chose wisely, but after it became apparent that a lady in the slower line had chosen poorly, she, literally, started screaming at me, accusing me of cutting the line and saying I needed to wait my turn.

Second, I went to check into my room at the Hyatt later that afternoon only to find out that my reservation had been made for the night before and I didn't have a room. They also proceeded to tell me the hotel was full for that night.

Third, I'm decompressing and having a beer with my girlfriend later that evening in downtown Denver. At the exact time that we should be leaving to make a dinner reservation at a nearby restaurant, our waiter has gone MIA. In the midst of trying to get our check paid, someone also walks up to our table that was in the audience that afternoon. He wants to chat, in depth, about some of the points I made and basically tell me his entire life story 🙂

What is the point of these three stories?

Be who you say you are.

I can't stand up on stage and talk about leading by example, having integrity, being compassionate, and caring about others if I'm going to turn around and yell at the Starbucks barista (or patrons), the Hyatt receptionist and the restaurant waiter. I also can't be too cool for school and blow off the audience member.

Please know, I'm not claiming to be perfect. I'm far, FAR, from it. I still get mad and impatient with people from time to time, but when I do, I try to own it and do it better the next time.

Because I always aspire to be who I say I am.

Scott
« Previous Post If You Want to Win a Major You Have to Be Willing to… Next Post » Bobby Herrera: The Gift of Struggle