Please note – I realize politics is a highly charged topic and many people get fired up about it. That’s good – passion means you’re alive. Just realize this post is meant to empower and provoke thought and a positive attitude…not to offend.

What do you think I’m going to say???

I cannot wait for 2016 because our great country will be flourishing.

I cannot wait for 2016 because we’ll finally have a new president.

I have a simple saying that I tell every athlete before a race: expect the best; prepare for the worst. 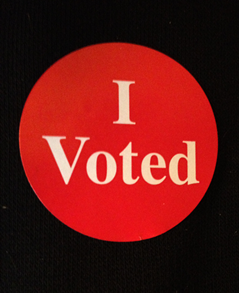 Where I am coming from is that an athlete should always expect everything is going to go exceptionally well. I tell them, you’ve done the hard work. You’ve done the training. You’ve got the strategy. Now go out there and execute it to the best of your ability. HOWEVER, if things should happen to not go your way, be prepared to deal with it. Things almost never go perfectly. But does it make sense to live in chronic paranoia, waiting for the worst to happen?

This post is in response to the zillion tweets and posts on Facebook I’ve seen since Tuesday night. And this is going to seem like I’m calling out everyone on the right…but I’d probably be writing the same exact thing if Romney was elected. It’s more about a generalized mentality.

Are you really expecting the best for this second term? All I’ve heard since Tuesday is that we’re condemned to be Greece, we need to buy water and canned goods immediately and there’s a massive Armageddon coming for our country.

Sorry, I’m not going to live like that. Four years is a long damn time…and life is too short.

If YOUR answer is yes, you’re limiting yourself. You’re better than that – in thoughts and actions. Past failures and mistakes CAN equal future successes.

I’m sure this will inspire some comments and emails coming back to me, and that’s fine. Everyone is entitled to their own opinion. Where I take issue is when people spew negative opinions into the world with no regard for the possibility of something positive happening. And if you’re going to tell me that the worst is coming because of a, b, c, d, e, and f, I hope these things are grounded in factual evidence and not subjectively biased opinions.

Truthfully, I’m not political. At all. I simply want what’s best for our country and, after hearing months of negative political campaigning, I would like to hear united positivity and hopefulness coming from both sides. If things go bad, fine. Let’s be prepared and deal with it when we get there.

Personally, I’m going to expect the best…regardless of my political affiliation. I believe it is how we should all live our lives. It seems to beat the alternative.

(P.S. If you think you know how I voted based on this post, you’re more than likely wrong :))