Experienced athletes always say to expect the unexpected in Ironman. The day is long and lots of crazy things can happen. And they’re not lying. Ironman Wisconsin 2012 was my fifth Ironman and certainly my most “interesting.”

When I did my first Ironman six years ago, I believe, they were capping the field at 2200 athletes. Now they allow 2800. So, whether it’s the additional athletes or a tighter starting area, the IMWI swim has turned into the most obnoxious water-based royal rumble I’ve ever seen. And it was like this for the first 1.5 miles…at least.

As far as how I felt, this was the closest I’ve ever been (which was really not all THAT close) to having a panic attack on the swim. There were so many people around me and, regardless of which side I was breathing on, I was swallowing so much water that it got a little scary. But I talked myself down and controlled what I could control…which was basically rumbling forward.

Swim time of 1:14 was a few minutes slower than I thought I’d be but the positive was, I felt fresher after this swim than I had in any previous Ironman. I could’ve swum all day at that pace. I attribute the slower time mostly to a poor starting position. Next time (uh, is there really ever going to be a next time?) I’ll start towards the front and go out more aggressively…instead of middle of the pack and getting boxed in with the chaos.

The Bike: a pity party.

The first 30-40 miles were fairly uneventful. I could tell I didn’t have the best legs that day but I know the course, know how to make up time, and know how to pace myself. So, I figured it would all work out fine.

Then it went bad. Reeeeeeeally bad.

I’ve never had significant knee pain in my life but at mile 40 I started getting sharp, shooting pain on the outside of my R knee. It was going all the way down my tibia (shin). Still, the pain was coming and going and I was able to mostly ride through it. 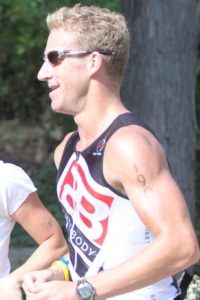 The sharp pain turned into a massive dull ache. I couldn’t push a gear. I got off my bike twice to massage and stretch, but no luck. I tried riding knock-kneed and bow-legged. No luck. I tried shifting my weight forward and back in the saddle. Also no luck.

Fast forward to mile 105. I’ve been biking with, more or less, one leg for the last 50 miles. There are a couple of steep hills on Whalen Rd coming back into Madison and I have to WALK my bike up the last hill. My head is slumped down and I’m crying. A total woe-is-me, why-is-this-happening pity party. I was lower than low.

I’d bet the farm that I’ve never gotten passed in the last 10 miles of an Ironman bike, but on this day, I get passed by at least 50 people. As people flew by, I got many words of encouragement because everyone thought I was just tired. They had no idea.

I always said I would never involve God in triathlon. There are people starving, dying, homeless and jobless, and there are more important issues (in my humble opinion) than me going fast in a triathlon. But I find myself praying that my damn right knee will just numb out so I can at least hobble through the marathon and not have to walk the entire thing…

So, after my 5:48 bike (31 minutes SLOWER than two years ago) I take my sweet time in the second transition; stretch, massage, pray and slowly shift to an “old-man shuffle” as I start the run. The first mile is brutally slow and I’m basically dragging my right leg behind me. But I can also feel it loosening up and by the time I get into the second mile, I start to think this might be doable after all.

With each stride it becomes apparent that whatever was killing me on the bike is going to be a non-issue on the run, but I still toy with the idea of running really slowly and taking it all in, while minimizing the suffering. But that’s not my style. When I do something I try to do my best at it and there’s nothing I hate more than looking in the mirror after a race knowing I didn’t try my best. Trying my best is ALWAYS something I can control.

It was then that I decided I HAD TO end this thing on a good note. I couldn’t go 0-for-3 that day on swimming, biking and running. And because I don’t know when I’ll go back to Ironman again, I didn’t want to leave with a bad taste in my mouth and any gas left in the tank.

The blessing of going so slowly on the bike was that I’ve never been as fresh going into the run. The curse was that I’ve never biked 50+ miles with one leg and I was bracing myself for some residual compensatory ugliness on the run. But that ugliness never really came. Aside from a couple brief moments where I thought I might cramp in my left quad and hamstring, my body held up pretty well.

Anyone who has done it knows an Ironman marathon is about survival. You simply try to disintegrate as little as possible. I turned the 13.1 mark at sub-8:00 min/miles and had brief aspirations of running under 3:30:00…but I was getting tired and my 7:45s turned to 8:15s. Still, in the grand scheme of how many Ironmans I’ve done, I disintegrated the least on this one. Sure, it got hard at the end…but they’re ALL hard at the end. It’s 140.6 miles for crissakes!

I finished the marathon in 3:34, which was my best Ironman marathon by 14 minutes. It still hurt…a lot…but there was sweet satisfaction in giving my all, ending on a good note and making the most of a tough day. Total finishing time was 10:51. Glass-half-empty says I was 23 minutes slower than 2010. Glass-half-full says it was still my second fastest Ironman and was the best I could muster that day. I’ll take the latter attitude.

I always try to leave a take home message from these blog posts and this one comes back to what I typically say about racing – it’s simply a metaphor for life. Life can be hard and things rarely go according to plan. There can be huge, seemingly never-ending lows. But when this happens, are you going to bi+ch up and throw yourself a continual pity party or are you going to turn it around and make the best of an unfortunate situation?