In some of the previous posts I’ve talked about how small, simple, manageable choices can make a HUGE difference in the big picture. This post will have a slightly different tone…

I was fortunate enough to attend a black tie event for pediatric cancer in Chicago this weekend. Very powerful. Very moving. There is nothing like seeing kids suffering from cancer to put things in perspective. I don’t think anyone made it through the night with dry eyes.

I met up with a prospective client last week at a coffee shop (my “second office”) because he’s had some lower back pain and he wants to get back into shape. We had a great conversation, discussed his goals, mapped out a plan of action and decided to get started next week. I sent him a follow up email afterwards and I received the following response:

“This all sounds good. Let me just give it some more thought and I’ll get back to you.”

Uh oh. I see where this is going.

One other thing I do know – if someone tells me they “want to give it some more thought,” it’s a done deal. They’re looking for obstacles instead of opportunities. Sure enough, a few days later, I get the following:

“Life is really busy right now and I think I’m going to wait until things settle down before I get started.”

Yep. Saw that one coming from a mile away. 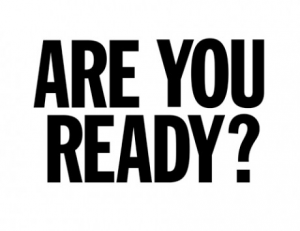 Also, while in Chicago this weekend, was my girlfriend’s nephew’s birthday party (he’s 2 years old). I call him the “etrade baby” because he’s so cute, he seriously needs to be on a commercial. There were young kids of all ages running around…and one of them was amped up on sugar and kept smacking himself in the head with an inflatable rubber ball. Considering he did it for almost an hour seemed a little weird, but still funny nonetheless 🙂

I couldn’t help but remember how easy and carefree and “settled down” life was at that age. Of course, you don’t realize it at the time, but it is there all the same. You only come to appreciate it years later when life is a never-ending state of busy.

So, here’s the point – if your life is anything like mine, it will NEVER settle down. It will never walk up to you, perfectly packaged, with a pretty red bow and warmly encourage you that NOW is the perfect time to embark on the XYZ you’ve previously neglected because you haven’t been ready or you’ve been too busy.

I gave a presentation to the Uptown Rotary Club a couple weeks ago and I concluded it by citing a very interesting study. The study was done on elderly people in nursing homes and, to summarize, most of these people claimed three primary regrets at the end of life:

None of them said “I wish I would have waited just a little bit longer, until everything was perfect and I was ready”…

Soak it up and live for today.

P.S. Please leave your comments below. I’d love to hear them!

P.P.S. Great video to watch on the pediatric cancer event I attended. THIS puts things in perspective: http://t.co/i0qD5lH7QJ