For the last three years I’ve made it a point to do something really cool for my birthday. This year I decided to hike the Grand Canyon and cross it off my bucket list.

So, on Easter Sunday I set the alarm for 4:30am and drove 4.5 hours from the Las Vegas Strip to the South Rim of the Grand Canyon. And as the elevation went up and up and up, so too did the anticipation. Total, I hiked 7 miles (with about 4000 ft of elevation change) along the Bright Angel Trail. But I took plenty of time to soak up the views and atmosphere and snapped plenty of pictures. It did not disappoint.

Below are the top 3 things I took from the Grand Canyon. Two of them are simple…one is more thought provoking. 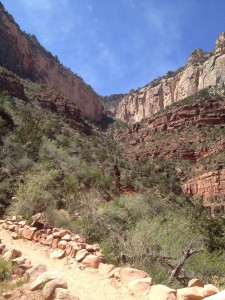 I had to drive another couple hours after I finished so I really thought a lot about #3. I’ve often felt a “connection” with people who do this sort of thing. Words don’t even need to be spoken – you can see it in their eyes. For the most part, the people going down the canyon were carefully watching their steps to make sure they didn’t fall and the people going up were sucking wind and trying not to look up to see how much farther they had to go. But the look on their faces all said the same thing: “There’s no freekin’ place on earth I’d rather be than in the Grand Canyon right now.”

So, as I age gracefully into my latter years (LOL), it’s becoming clearer to me that I place far less value on THINGS than I once did – what I value now are moments and experiences. And this isn’t my push to turn you all into hikers and mountain climbers, but it is my push to make you think about what truly makes you happy.

What would make you get up in the middle of the night and drive for hours, just because it sounds like fun and you find it intrinsically enjoyable? What would it take to get you out of the tunnel-vision crazy rat race of everyday life to look up and smile and say hello to every single person who walks by you? What would you need to be doing to have the look on your face that says “there’s no freekin’ place I’d rather be than where I am right now?”

The answers to these questions are your first steps towards a Limitless Life.