I know many people running the Twin Cities Marathon and 10-mile this weekend. I’ve done TC 3 times (with reasonably good results), and here are my top 10 tips for having your best race possible:

2. Keep the calories coming in. Weather looks to be perfect – somewhere around 50 degrees at race start. Many people don’t realize that in cooler temps (~50ish) your body actually has to burn additional calories just to stay warm. So, make sure you’re getting the standard 200-400 calories/hour (based on body weight). It doesn’t matter if it’s you or me or a Kenyan – these caloric requirements are a must.

3. Minimize vertical oscillation. The best runners translate their energy forward – not up and down. It’s easy to start bobbing up and down when you’re running at slower paces (which you will be at the start of the race) and while 1-2 inches of vertical oscillation may not have an effect at miles 5, 10, 15 – it’ll bite you in the ass at 20 or 25. Try to run as LEVEL as possible.

4. Stop looking at your watch so much. Spending your race glued to your watch is a surefire way to ruin your running economy and efficiency of movement. Focus on how your running “feels” and stop worrying about whether your GPS says you’re 5-10 seconds fast or slow. By this point in your training, you KNOW what your goal pace feels like…and your objective is to cover territory as efficiently as possible. Use your watch for periodic checkpoints only…to see where you stack up relative to your goal time. This tweak alone will give you significantly more energy later in the race.

5. Run tangents. The shortest distance between two points is a straight line and if you’re not paying attention, it’s easy to run 26.5 miles+ because you’re zig zagging all over the road. Try to pick a line and stick to it. 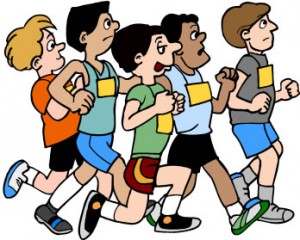 7. Run to the end of aid stations. Most people will go to the first volunteers at any given aid station. It’s a lot less congested at the back, so I always continue to run until I get to the back of the aid station, then I veer in and grab whatever fluid/food I’m going to. Less chaos back there.

8. Pace yourself smart. Example – if you’re hoping to run a 3:30:00 marathon, DO NOT start out with the 3:30:00 pace group. You’re doomed if you do. You need to know where they are, but you should start a little bit behind them (call it a 3:32:00 or 3:33:00 start pace) and creep up as your body starts to settle into the race. Then try to hold on at the end. I’ve seen many athletes crash and burn by trying to hold onto a pace group from the very start.

9. Expect it’ll hurt like hell. Marathons usually hurt for ANYONE doing them, but this especially applies to those who are racing it and seeking a bangin’ time. A mistake many athletes make is to wish…and hope…and pray…that they’ll feel good the whole time. This almost NEVER happens and if you set yourself up with the false hope of feeling good start to finish, you don’t know what the heck to do if you start to feel bad. I always tell athletes – EXPECT that the race is going to hurt, but EXPECT that you have the confidence, determination and ability to overcome it. Trust in yourself and trust in your training.

10. Smile and enjoy it. Thank volunteers and people out there on the race course. Soak it up. In the grand scheme of things, the race goes by pretty fast. Savor the fact that we’re the lucky ones.

P.S. If you found this useful, I sure would appreciate you commenting and sharing it with others 🙂