This isn’t the post I thought I’d be writing.

Last week I talked about demanding more of yourself and this crazy Grand Canyon run I was going to do. I figured today would be a continuation of a similar theme of never stopping, even when things get hard, until you’ve achieved your goal.

I was wrong. Here’s what really happened…

The day started “normally” enough: It was 36 degrees at 5:30am when we began descending from the south rim. I wasn’t feeling great but I’ve done enough of these things to know that long runs are like long business projects – even if things aren’t going well, it always gets better at some point.

We were about 9 miles in when something seemed “off,” and my girlfriend realized we’d taken a wrong turn (she’d done this run before so I was relying on her for much of the navigation). Turns out we’d ran over 3 miles in the wrong direction on the wrong trail.

Now, it’s hard for me to set the stage of how this really felt. The sun is coming up, it’s starting to get hot, I’m not feeling great and I’m less than 25% of the way done, and I know that I’ve just added 3 “bonus miles” to what was already going to be a 45+ mile day.

Oh, and I’m in the middle of the Grand Canyon.

You know all that positive self-talk stuff I speak about? Oh yeah…it was out in full force 🙂

By the time we neared the north rim (halfway point), I made the decision we should turn back, only 1.7 miles from the top. It would have taken us probably another 1.5 hours to get to the rim and come back down to where we were…and it meant that we’d likely be climbing the last 5+ miles to get back to the top of the south rim in complete darkness.

So, we headed back. In the end, we had covered 47 miles and close to 20,000 feet of elevation change in under 14 hours. But I had fallen short of my goal. It was Rim-to-Almost Rim-to-Rim.

Want to know the cool part, though?

Those 3 detoured “bonus miles” we did in the beginning ended up taking us to a scenic overlook of the Colorado River: 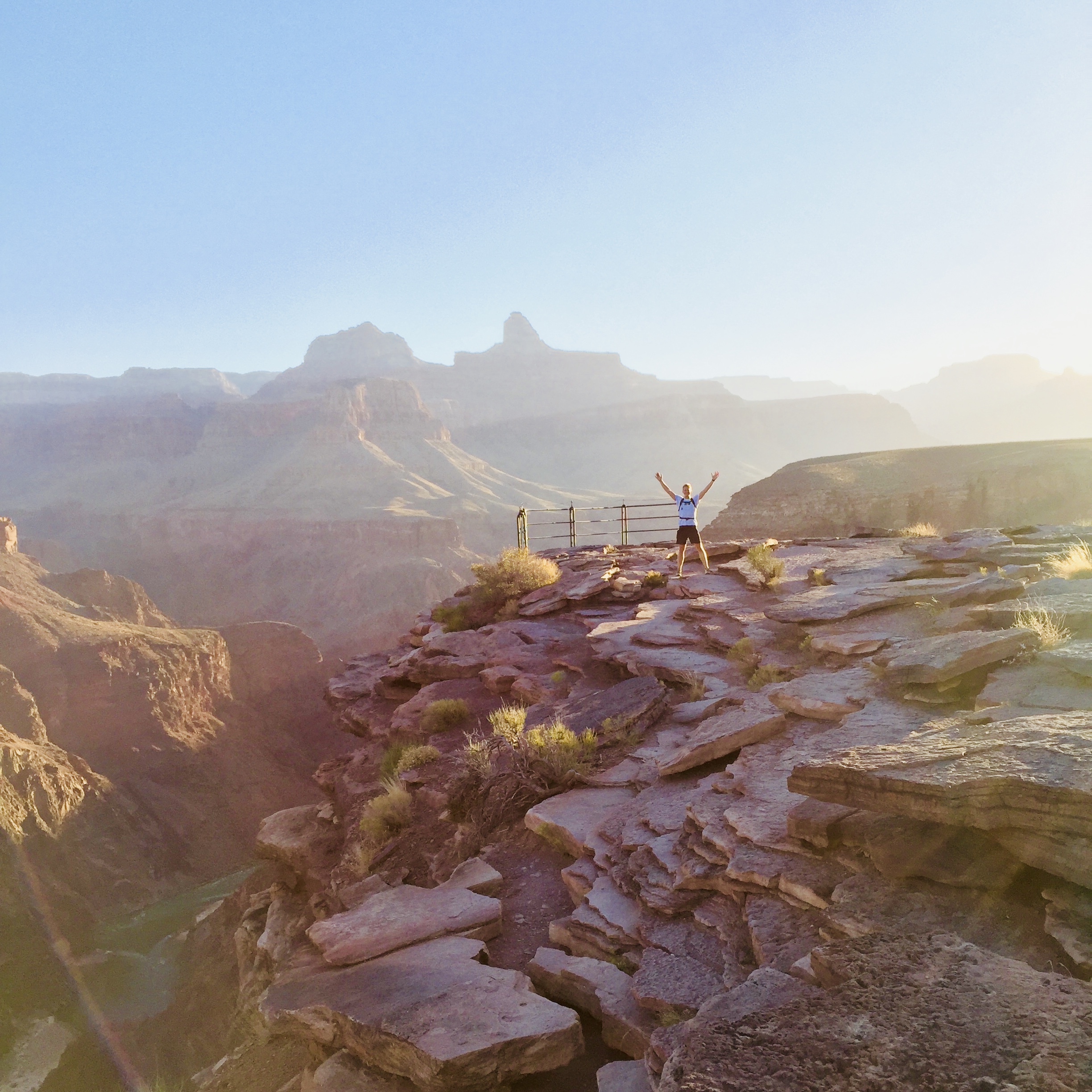 (The scenic overlook. I look like I'm singing "YMCA")

As we’re approaching the overlook, we came across a couple, which was somewhat odd because we hadn’t seen another human for miles. They were holding hands and as we get closer to them, the woman shouts:

“We just got engaged!”

I can’t make this stuff up. This couple must have gotten up in the middle of the night to hike down to this scenic overlook in time for sunrise (they weren’t runners). And, I don’t care how good you are at taking selfies, if you’ve just gotten engaged, you probably would like for someone else to take a couple of pictures, right?

So, that’s what we did. Stopped what we were doing and congratulated and took pictures of a newly-engaged couple of complete strangers. I know they appreciated it.

You can take what you want from this story. Maybe it happened for a reason...or maybe it was pure coincidence. Who knows? But even if things don’t always go perfectly for you, it sure feels good to help them go that way for somebody else.

Would you like to have an Outperforming experience at your next team meeting or company event?

If yes, please Contact Me Here and let’s make it happen 🙂